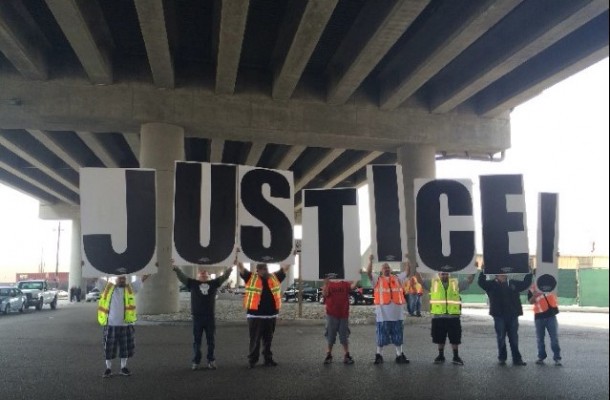 After six days of strong picketing from America’s largest port complex, to retail customers like Michael Kors and General Electric, to the U.S.-Mexico border, effectively shutting down the largest trucking and warehouse companies serving the ports and causing long lines of trucks at major marine terminals in both LA and Long Beach, all striking port truck drivers and warehouse workers have successfully returned to work, for the first time without challenge from management.

“We are fed up with how the companies treat us, so we are standing up and fighting back. No more abuse! No more misclassification! Drivers and warehouse workers have just wrapped up our 13th strike, and we won’t stop until we all have justice,” said Domingo Avalos, a port truck driver, misclassified by XPO Cartage as an independent contractor.

“For five years I was a temporary worker at the Cal Cartage warehouse. On May 2, 2016, over 100 of my co-workers and I were fired for demanding an end to wage theft and our rights. The Port of LA must ensure that Cal Cartage follows the law on port property or bring in a warehouse operator who will, and I won’t back down,” said Fausto Torres, a Cal Cartage warehouse worker.

Starting Tuesday evening, warehouse workers and port truck drivers alleging misclassification as independent contractors who haul and handle cargo for the United States Department of Defense and major name brands, including Amazon.com, Lowe’s, Target and Kawasaki, launched massive unfair labor practice strikes at the Ports of Los Angeles and Long Beach. On Wednesday, strong picket lines continued through the night at company yards and at marine terminals at America’s largest port complex, creating long lines of trucks at the few terminals that have continued to allow trucks from the struck companies onto port property.

On Friday, the strike expanded to XPO Cartage’s yard on the United States-Mexico border. Ambulatory picketing is taking place at the Toyota switching yard, one of XPO’s largest customers. Workers from the following companies are on strike: Intermodal Bridge Transport; XPO Logistics including XPO Cartage and XPO Port Services; and California Cartage including K&R Transportation and Cal Cartage Warehouse.

The cries of the millions of American workers who are misclassified as independent contractors are reaching a fevered pitch. Spanning employees in the janitorial, e-commerce, entertainment, home care, construction and port truck driving industries, these workers are not only robbed of basic workplace protections like the right to minimum wage, overtime pay, and a safe and healthful workplace, but they are also being cheated out of such rudimentary workplace benefits as unemployment compensation, workers’ compensation and the right to form a union.

Port drivers are on the front lines challenging this unfair labor practice by filing claims for wage theft and striking their employers for retaliation.